I guess that "disappointment" is the best way I can sum up my feelings. But I would like to apologize to 343i.

In past posts, I've accused you guys of having no imagination. I cited the Promethean guns as proof. I guess I was wrong.

: This is the reason why it was removed : Halo 4 could have had a stasis gun.
: Or a "grapple harpoon." But these weapons were taken out in an
: effort to make the game more accessible and less sci-fi.

What I will do is call the structural integrity of your collective spinal column into question.

: Franchise creative director Josh Holmes told GDC audiences that "when we
: started out, I was really pushing the team to go in a very sci-fi
: direction. I wanted to embrace the sci-fi nature of the enemies and
: explore concepts that were outside the box for Halo, things that you'd
: never seen before in the Halo sandbox."

: Unfortunately, the more sci-fi concepts didn't resonate with players.
: "What we found as we were testing these weapons with players, the
: really deep sci-fi approach wasn't relatable. As a result, they weren't
: really gravitating to these weapons."

: "It really sucks when you're making new weapons and no one wants to use
: them," Holmes added.

The absolute, most important question I can ask is this: Were you playtesting in campaign or multiplayer?
I can very easily see this happening in a setting where you look at gun silhouettes and decide which you want in your loadout. I can see how, in a multiplayer setting, it feels safer to stick to precision weapons that you're familiar with.

But in campaign, where you have space to fool around and see what something does, players should be experimenting. Were they? Were the long stretches with nothing but Promethean guns not available for testing?

: Eventually, 343 Industries had to make sure that all the weapons in the game
: could be understood by players immediately. For example, the scattershot
: is "at it's core, a shotgun," even if it does disintegrate
: enemies. The other weapons that made Halo 4's final roster all have
: immediately understandable real-world counterparts, like a sniper rifle or
: an assault rifle.

I can't help but think of the playtesters in the context of this article.

: "One of the barriers to entry with Halo is that it is sci-fi,"
: Holmes pointed out. "It's had a very steep learning curve that's
: turned off a lot of players." 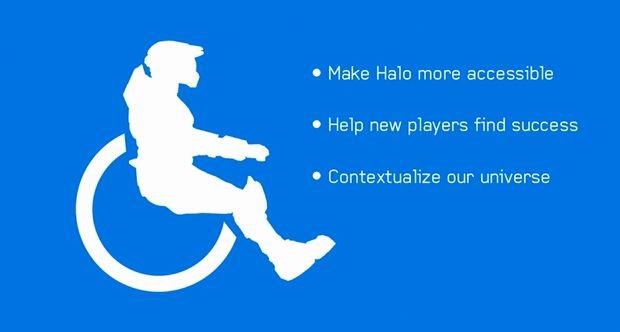 This picture right here is... just...
I saw it in Holmes's presentation, and didn't know what I was looking at. Now I've made the connection.

The Master Chief in a wheelchair. Handicapped. Crippled.

Accessibility is, well, a laudable ideal, but if it comes at the expense of science fiction, it's compromising what Halo is. As 343i has stumbled around blindly looking for an identity to call their own and a product that'll satisfy all the factions of the Halo fandom, there's been enough compromise already.

Holmes ended his presentation by talking about the need to believe in yourself. 343i ain't there yet. Not even close.

Pardon me, I'm going to go set something on fire.
Unrelated to this, actually. The tumbleweeds are piling up against the fences.